The Institute of Science and Technology Austria (IST Austria) is a young international institute dedicated to basic research and graduate education in the natural and mathematical sciences, located in Klosterneuburg on the outskirts of Vienna.

IST Austria is committed to conducting world-class research. By 2026, up to 90 research groups will perform research in an international state-of-the-art environment.

One of the hallmarks of the IST Austria PhD program is the shared graduate school experience. An initial stage of exploration encourages broad exposure to important scientific approaches and problems. This allows students to lay a solid foundation for intensive research in the second phase of the PhD program. 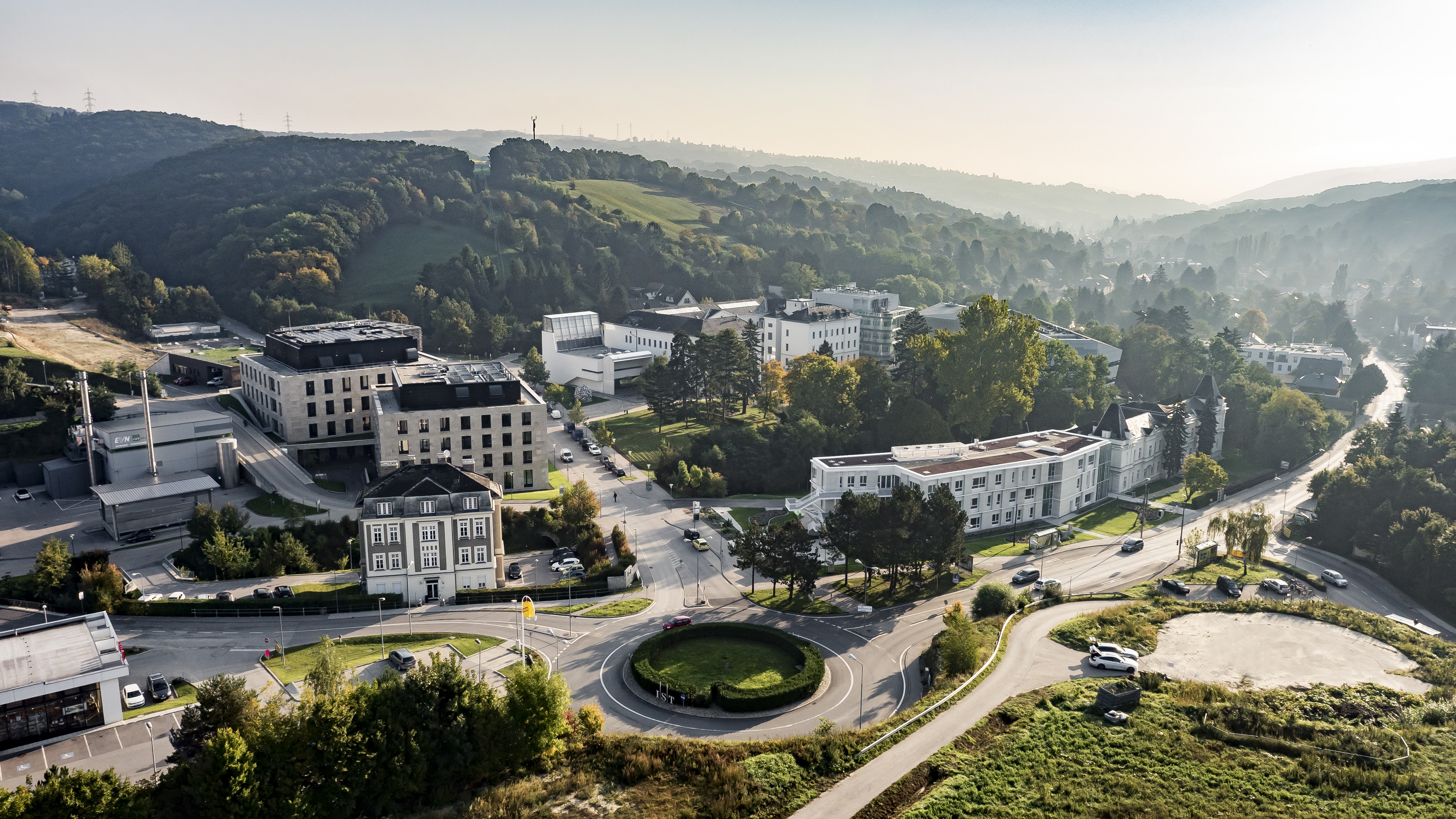 IST Austria’s faculty hiring strategy is encapsulated by the motto People before area; quality before speed. We are dedicated to bringing the best minds of the world to IST Austria to pursue cutting-edge basic science research. The Institute was inaugurated in 2009 and will grow to about 90 research groups by 2026. This exciting momentum is driven forward by every scientist added to our team, including every PhD student.

Our scientists, from professors to postdocs to students, hail from all corners of the world, representing over 70 different nationalities, and building on research and degrees earned from the finest global scientific institutes and universities.

We use English throughout the institute as the language of instruction and communication.

Our U.S. Style Graduate Program is characterized by modern comprehensive training with a special focus on interdisciplinarity.

The following graph shows cross-group collaborations at IST Austria, based on co-authored publications from 2018. 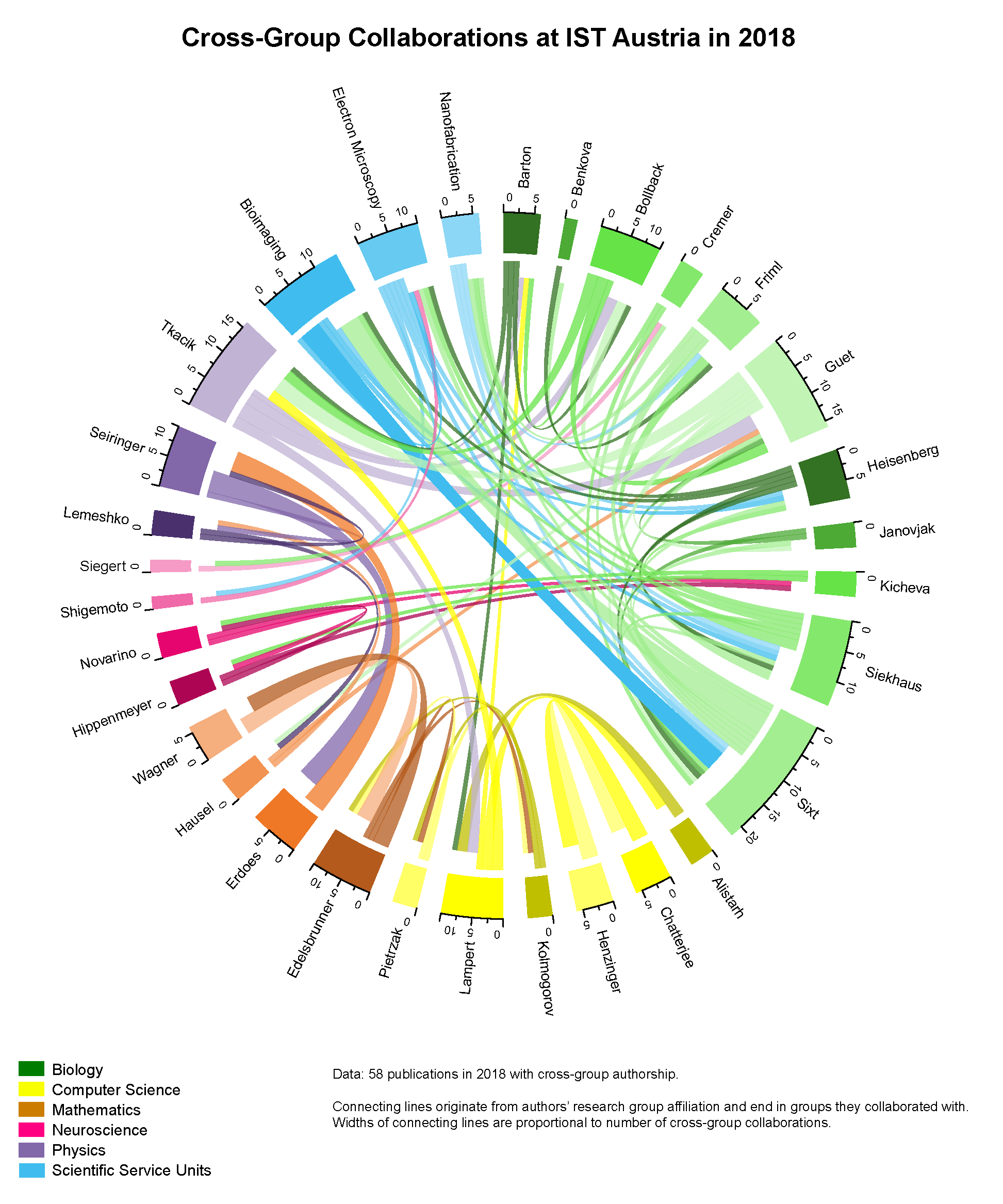 Students work closely with outstanding faculty within small research groups and have access to first-rate facilities. Students spend the first year completing coursework and rotations before affiliating with a group.

This first phase of exploration allows students to be sure that the research topic, as well as the research group, are the best match for them before they embark on in-depth thesis research in the second phase.

Entry with a Bachelor's or Master's Degree

We welcome students with a bachelor’s or a master’s in science to apply to our PhD program.

There are six tracks of PhD study:

“Students are the lifeline of science.” Listen to what Prof. Daria Siekhaus has to say about the importance of students at IST Austria.

In all fields of research, funding is a very important topic. IST Austria relies on diverse funding sources to support all its researchers. The Grant Office is there to support IST scientists who would like to apply for external funding.

At the founding of IST Austria in 2006, 95 million Euro was put aside by the federal government as a conditional, performance-dependent budget that could only be secured if the Institute obtains the same amount in third-party funds by 2016. IST Austria has been exceptionally successful in raising third-party funds over the past years. Out of the 53 professors currently under contract, 34 professors—two thirds—have received a grant from the European Research Council. In the year 2016 alone, three advanced grants, two consolidator grants, and five starting grants were awarded to scientists at IST Austria. The graduate school is the beneficiary of one of the largest awards received at the Institute so far: 4.4 million Euro were awarded in 2015 to the interdisciplinary PhD program of IST Austria by a Marie Skłodowska-Curie grant from the European Union.

The weekly Institute Colloquium is the principal research seminar at IST Austria. Scientists from around the world and from across all disciplines of the natural sciences are invited to present their latest findings.

On a regular basis, the institute is visited by international review panels consisting of leading scientists from around the world (including Nobel prize laureates) to form an independent evaluation of the institute.

Our distinguished alumni have gone on to successful careers after their PhD studies at IST Austria.

There are also regular TWIST talks organized by the Technology Transfer Office, which aim to support researchers in the commercial development and use of their research results.

Where do our alumni go?

This infographic shows where our alumni go after they graduate. 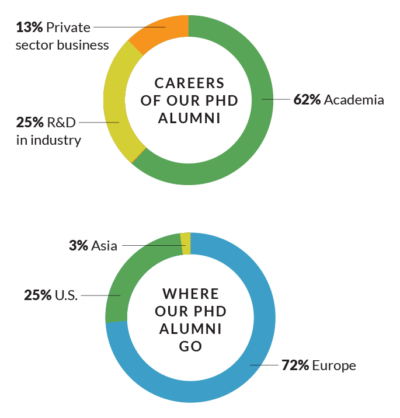 Where is IST Austria?

The Institute is only a 25-minute bus ride from Vienna, which is consistently voted one of the best cities in the world to live in. Our students have the choice of living in Klosterneuburg, a quiet area surrounded by beautiful woods, or right in the hustle and bustle of Vienna. We also have a number of housing options on campus.

Can you send me more information about this program?

Where is this school located?
Where is the campus located?

What other funding options do you have for this program?

In what language is this program taught?